Roadhammer Gaming is a company aimed at producing video games and software for a fair amount of platforms, such as android, mac computers and windows pc's, and I will be expanding to I phone and others as the buisiness advances. Future plans are to open a unique 3d immersed gaming facility, set up kind of like lazertag or paintball. In the basement is where the company will make and test games, the upper 2 floors are going to be open for buisiness based on a set fee for a set amount of gameplay. here's the plan:

With the rapidly expanding hologram technology and the recently discovered graphine method of 3D projection I will present to you Roadhammer Gaming, it will be a super Wal*mart sized 2 story building with 100 rooms per floor with single basement floor that players can rent time to adventure in a 3D gameworld. i plan on hourly rates for 'walk ins' and a 6 month or yearly pass for the regulars. Using gamemaker and my newest Invention 'elevating escalaters' I propose a holographically projected landscape, monsters and npc's hooked to the game system which will be in the controll room in the center of the basement. Next the elevating escalaters in select rooms will give the players the actual ability or just the Illusion of going up or down in the game giving the ability to have a game with 50 floors, or 150 floors or 500 floors, its virtually a limitless system! A money/stats 'credit card' will be given to the player at the start of the game, returning customers can bring their original card (game money and stats stay on the card to help insure future customer visits), to interact properly with the game, such as if you defeat a monster 'found shortsword +1' from then on the sword does 10% more damage after you swipe the card on the treasure chest or at a shop or save location. The middle of every room will have a treasure chest with a built in card swiper that pops out of the floor when needed, giving an item or upgrading armor/weapon or to load game money and player stats on the card if the prize is only game money and exp.

I want my facility to look something like this: 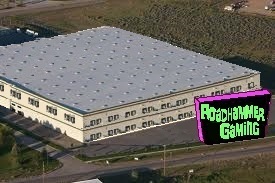